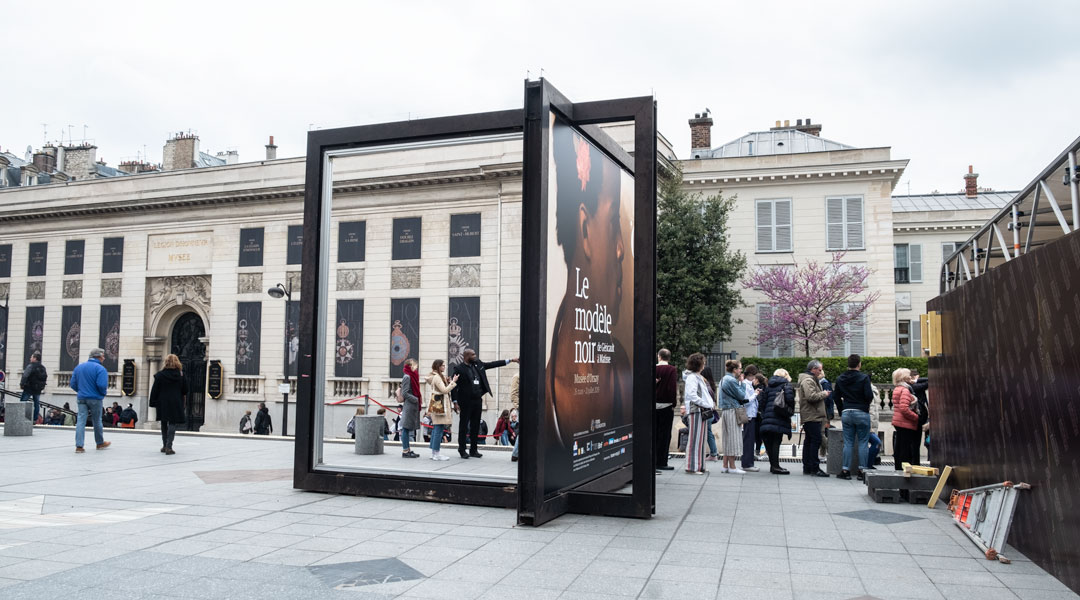 Black Models showcased images and perceptions of black people in the western art world after the transatlantic slave trade to modern day. The exhibition at the Parisian Musee d'Orsay was a challenging one, triggering ambivalent emotions in both my heart and head.

Going to Paris, I was very excited to see works from amazing artists from the 18th to 20th century like Matisse, Géricault, Cordier and Cézanne. I wondered what emotions were going to be awoken in me. Is this finally a different approach to the heritage of black people in the diaspora? Which black artists are going to be on display, and how do they fit in the history of the French people and their colonial legacy? However, the first thing that shocked me was the line in front of the museum to get inside! Silly me, I forgot that Paris is the undisputed cultural hub of our time! 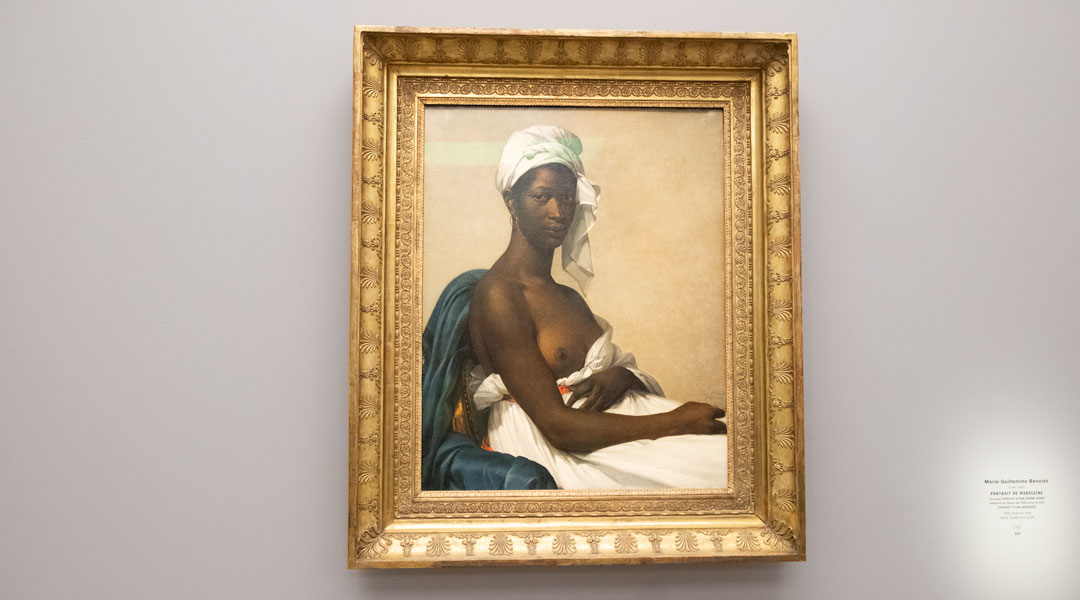 Anyway, as I arrived at the entrance, the first thing that caught my eyes was a portrait by Marie-Guillemine Benoist. They have changed the name to "Portrait de Madeleine" (formerly: "Portrait d'une négresse" later changed to "Portrait d'une femme noire"). I have seen this image plenty of times, but I never bothered to look up the artist name. Seeing this painting for the first time in real life made me quiver. From the many times that I had seen this image, I never noticed her pain. The pain of feeling ashamed and uncomfortable, of counting the time in expectation of a quick end and her endeavour to cover up her nudity with her left hand. Her eyes are begging the observer to relieve her from her pain. Knowing there is no way of relief except going through the pain. At this point, I have to pay homage to Benoist. Being able to transport such an emotional expression via a painting is truly a work of a genius mind. This very first image set the mood for the rest ahead. 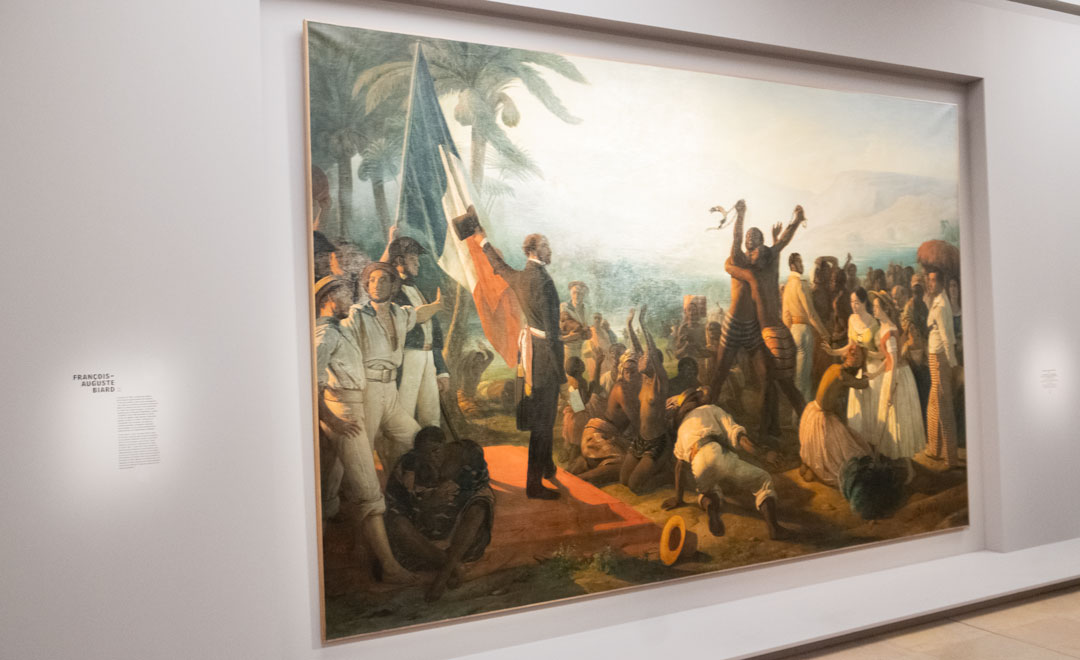 Strolling thru the exhibition the next painting that struck my attention was "L'Abolition De L'Esclavage Dans Les Colonies Françaises Le 27 Avril 1848" by Francois-Auguste Biard. Growing up a black man or woman in the diaspora the transatlantic slave trade is a historic event that will eventually hit you in one way or another. Not being able to imagine the horrible and cruel circumstances black people had to endure during transatlantic slave trade makes one question the legacy and the future that lies behind and in front of oneself, at least in my point of view. Biard's painting is full of metaphorical languages (the German word "Bildsprache" would be more appealing in this context) that I have to limit myself to two striking aspects. 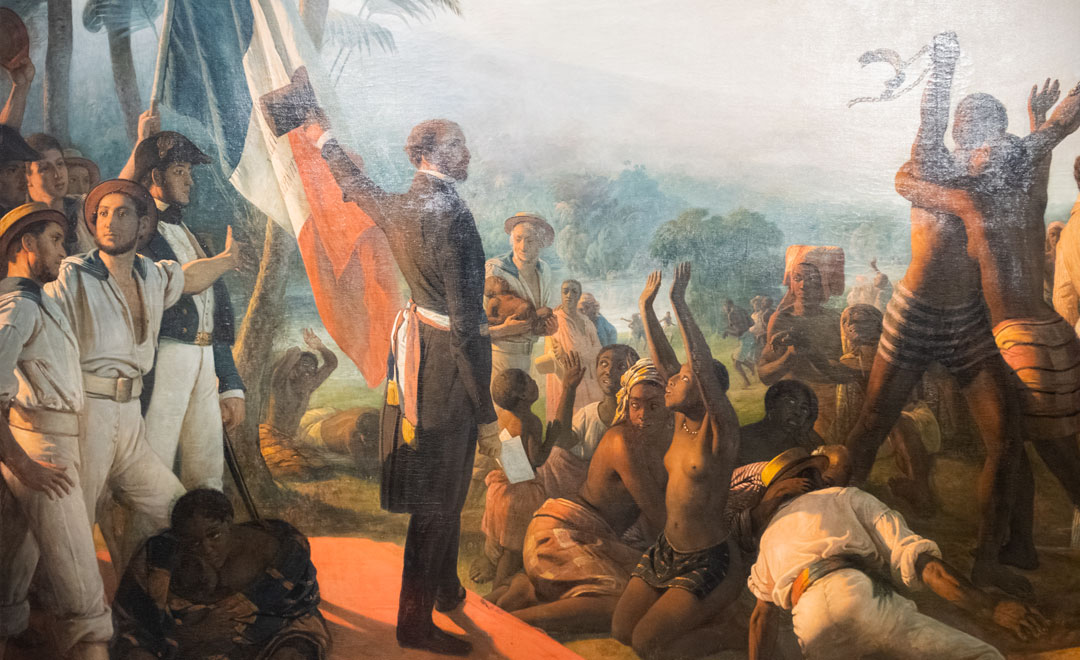 On the left-hand side of the painting a well-dressed French general or military leader is depicted. In his left hand he is holding a hat and swinging it upwards as if he wants to draw attention. Behind him one spots an over-dimensional French flag that is waving elegantly in the wind held up by a French navy soldier together with a few comrades. The general holds a letter in his right hand. He is holding it as if he has finished reading it to a crowd of black people standing in front of him. Most of them are barely dressed, wearing just a rather tiny woven material covering only the bare necessities. In the middle of the crowd stand one black man and a black woman. While the woman is embracing the man, he is lifting his hands to the sky as if he has won an Olympic gold medal. I believe the black man is holding metal chains in both hands that seemed to be holding him back for a long time.

These two sections are the most striking and meaningful expressions, in my opinion. Both scenarios suggest that freedom for the black man and woman has been given by the grace and thoughtfulness of the French occupying forces and their superiority. Even though we cannot neglect the truthfulness of this statement, it furthermore implies that Africans had never made an effort to free themselves. In this statement lies one of the many stumbling blocks black people continuously have to live and go through within our present time. Not being able to regain dignity and freedom autonomously is a truly unpromising start in a new future. But what bothers me the most is the fact that this image had been painted not necessarily to harm black people. It is hardly imaginable that black protagonists were invited to the Salon of 1849, where this painting was shown for the first time. This image is rather uplifting and encouraging the French people to feel and act superior towards people of African descent or darker skin colour. Furthermore, it predicts an era which Dr Kwame Nkrumah, the first president of Ghana after gaining independence from the United Kingdom diagnosed as neo-colonialism. Seeing this image made me feel quite angry and upset. It reminded me of all the hurdles that I had to overcome – some successfully, others not so much, glad to not have missed either one. Nevertheless, I see the transatlantic slave trade as one event in history that should uplift us black people, just because we have gone through the most inhuman period in human history and we are excelling to greater heights! 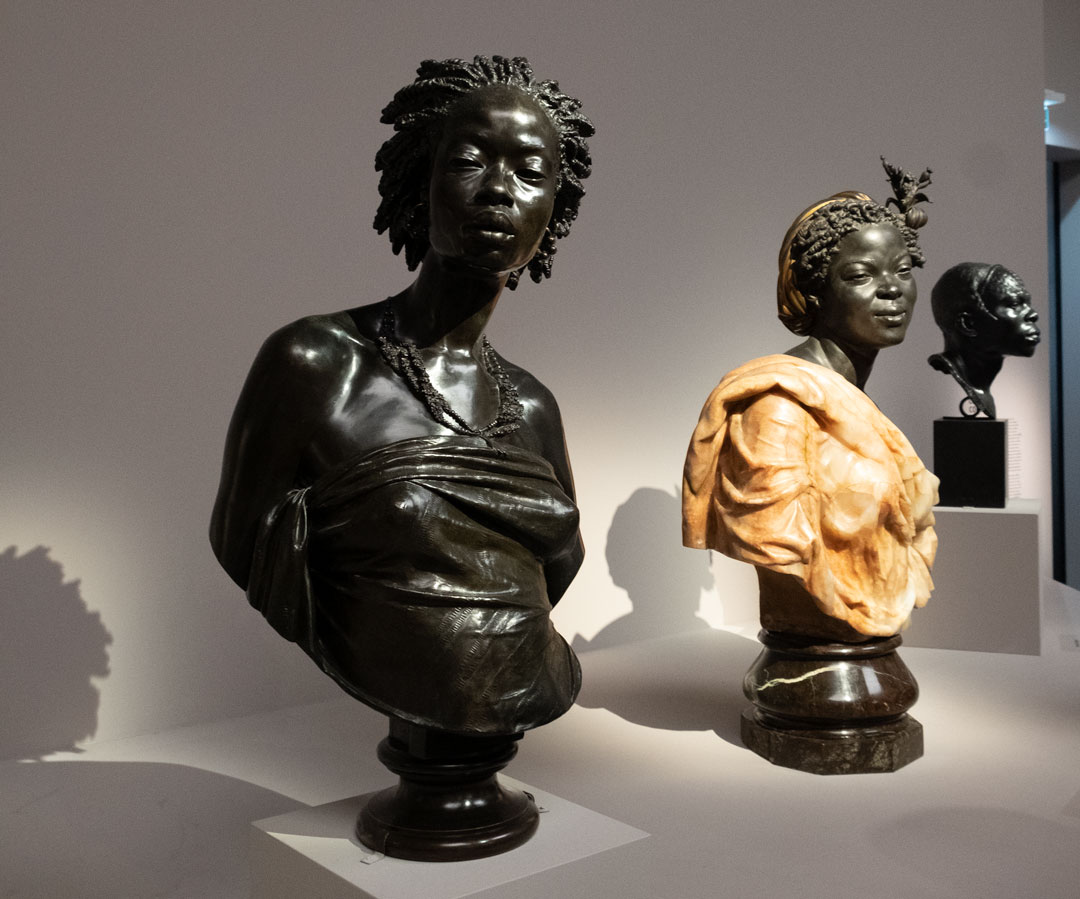 I kept on walking as I finally stumbled over an artistic expression of black people that was not about their relationship to a white person in power. Charles Cordier! His sculptures were a relief for me: Humbleness, gratefulness, sadness, truthfulness, fearlessness are all words I would use to describe the way Cordier portrayed his models. It is clear to see that he took his time to understand, observe and act beyond the burden history has put upon black people. Throughout the whole exhibition, this was the first time I felt something different than being a servant, entertainer or source of labour for other human beings. He did not sculpture his models as topless savages or use titles describing black people in demeaning terms. Even though we mostly still do not know the names of his models, he at least is telling us something about the ethnic origin of his models by using their provenance in his titles. 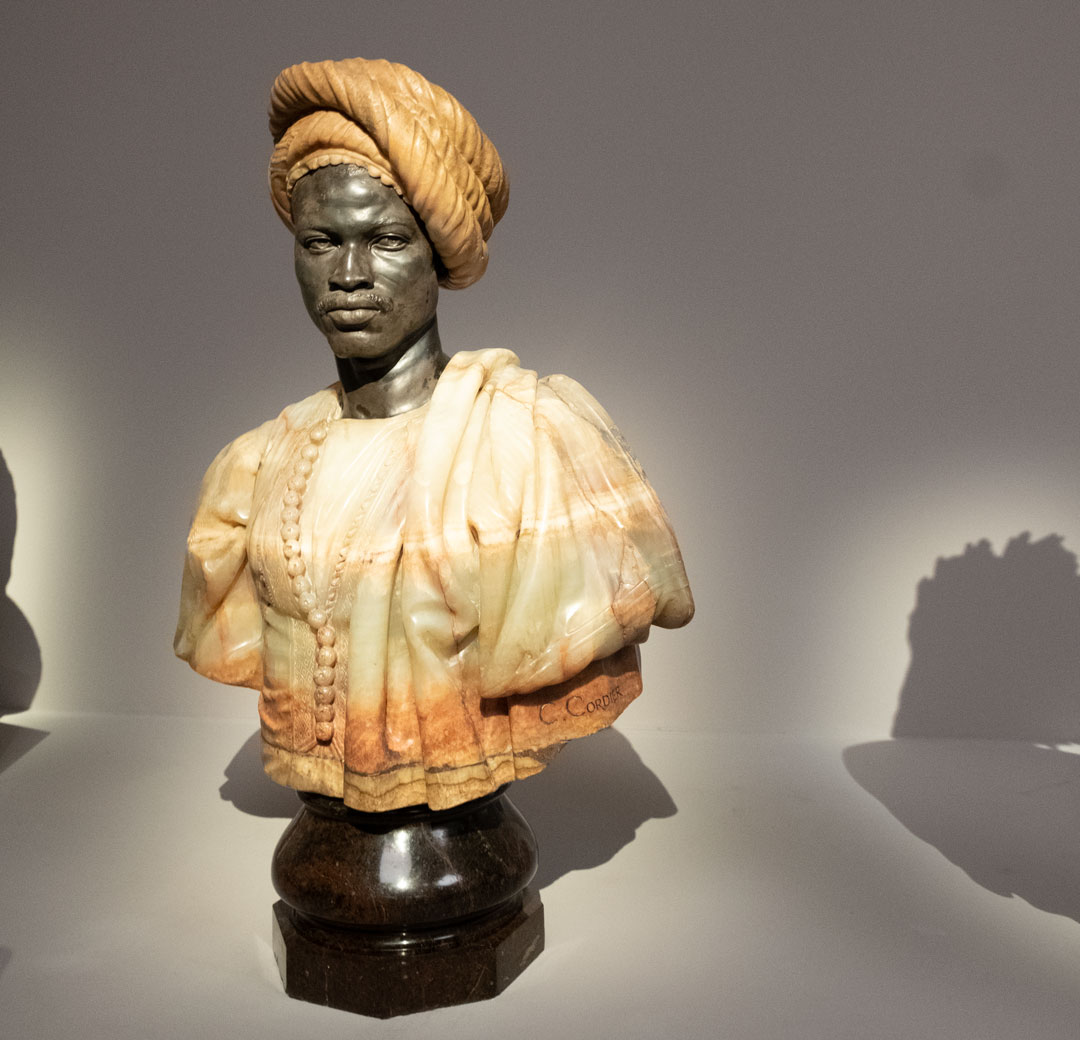 To make a very long story a bit shorter, I am glad to have seen this exhibition. I went to Paris just for this occasion and the fun of getting out of one's surroundings. I planned to stay for about three hours trying to make sense of what was on display. I only had half of the time due to the unexpected line in front of the museum. Therefore, I do not claim to have fully understood the whole concept of this exhibition. I highly do recommend to every interested person to go there and have a look for themselves. It is well worth it! Challenging oneself by letting someone else describe a part of your history by knowing or at least believing that all this is half-true, and at some point arouses the hunger to not just seek for answers and other viewpoints to sometimes unanswerable questions, but to furthermore create and reshape a new image and destiny for the future.